Evelyn, who was running Air Tamarak by herself at the time, came for me at my cabin early one morning. “I need you down at the dock right away. There’s an unplanned trip for you to fly.” That was all she told me before rushing back, so I didn’t know what to expect as I walked down to the dock. When I got there, a pickup truck was backed up to the ramp.

In the bed of the pickup lay the body of a fifteen-year-old boy, wrapped in heavy-duty plastic from head to toe, held together with duct tape. His mother and father were standing nearby talking with Evelyn. I overheard them telling her how the boy had lost control of the tricycle ATV he was riding while they were family-camping. Apparently, the boy’s grandfather had just told him to slow down, and in defiance the kid had sped off. Somewhere out of sight on the trail he’d lost control and plowed into a tree, breaking his neck. They’d found his body some hours later when he hadn’t shown up for supper.

Feeling awkward, not knowing how to act or what to say, I got busy pumping out the floats and fueling the Beaver float plane. I was to take the three of them further south to another outfitter’s home lake, where relatives would be waiting.

We carried the boy to the plane on a makeshift plywood gurney. I had to lash the boy’s prone body to the deck like I would an outboard motor, to keep him from rolling during flight. Pulling the straps down tight on him felt like an indecent thing to do, somehow a violation. It felt like I was hurting the boy. A sour odor was already seeping out of the dark plastic.

I pushed us away from the dock and got in, with the dad sitting next to me and the boy’s mother behind me next to her dead son. Once in the air, the dad started talking to me through the headset about hockey and other sports, as if it was an ordinary day and we weren’t taking the lifeless boy’s body to his final resting place.

During a lull in the father’s ramblings, flying southeast at fifteen hundred feet, I found myself thinking back to the time I’d fallen off the roof of our three-story house in that town north of Boston, when I was about the same age as this boy. How close had I come to breaking my own neck, just as easily as the poor kid lying behind me? I was asking the universe, why this boy and not me?

My older brother and I had been regularly sneaking out the dormer window of our shared third story bedroom, then crawling up the steep roof to a flat spot higher up to smoke pilfered cigarettes. On this day it had snowed some, then the snow had turned to light rain, leaving a crusty, frozen coat on the roof shingles. I went out the dormer window first and looked up the sloping roof and saw the thin crusted snow. “I don’t know about this,” I said to my brother, to which he replied, “What are you scared or something?” So, to show him how brave I was, I stupidly proceeded to climb up.

I started slipping on my second or third step. As the crusted snow under my sneaker gave way, I knew I was going to fall. It happened very fast. My brother told me later that he first heard me say “I’m falling, I’m falling!” then he saw snow go off the roof’s edge, then me reaching uselessly for any kind of purchase as I slid off. He was outside the dormer hanging on and waiting his turn to climb up, then watched helplessly as the shape of the roof sent me outward and down one story onto the edge of the front porch roof. Then I kept on going all the way to the frozen ground, very narrowly missing the cement that book-ended the front porch stairs.

I lay there with the wind severely knocked out of me, looking up at my brother, who was outside the dormer window holding onto its frame. Unbelievably, he was laughing at me and told me to stay put until he came down, like I was going anywhere! I wound up with a torn ligament in my leg, but that was all. It was only later when I relived the fall that I got very scared and wondered why I had not sustained more serious injuries or death.

As I touched down on the other outfitter’s home lake and began to taxi toward the tie-up dock, the three of us could see the small group of relatives gathered by a long, muddied-up hearse. When the mother and father took in that scene, they both slowly began to cry, their moans building into full-blown wailing by the time we reached the dock. Witnessing the mother and father’s shock and pain was a terrible thing and I held my silence within the uneven rumble of the Beaver’s nine-cylinder motor.

I secured the plane as the dozen or so relatives came onto the dock. After I released the boy from the tie-down straps, we awkwardly put him on a stretcher and his family carried him to the waiting hearse. Everyone was crying and wailing in despair. I waited until they drove away before letting out a deep sigh of relief mixed with sadness.

I taxied away from the dock for takeoff and back to Clova, knowing this was an experience I would not forget for the rest of my life.

Photo: Ray's childhood home when they moved from Quebec to a town near Boston 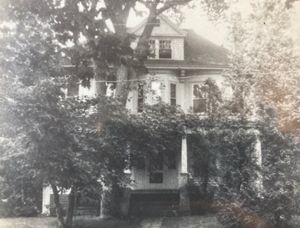