The cloud cover started pushing us back down into the treetops like some heavy god-like hand.

I knew I’d made a deadly mistake taking off when I did, as the visibility in the low fog not only denied me the option to turn back to the river, but also shut the door on making any kind of approach to land anywhere, period. I had no other choice but to try and claw my way toward Clova through the unforgiving bleakness.

I was bad-scared, and if the kid had any sense, he was too.

Due to my earlier unplanned sortie, I was lower on fuel than I needed to be, and that shook me.

In the back of my mind, I had a surreal vision of our twisted wreck hanging in the trees. In the nightmarish scene, the motor had pushed back into the cockpit, burning and crushing us, and the smell of leaking oil hissing against hot, misshapen metal hung in the air. 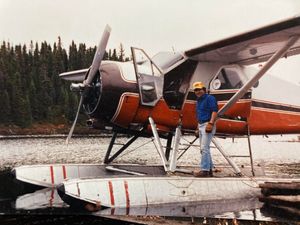 I managed to get us turned around enough to begin, if erratically, heading in the general direction for Clova, where I was at least familiar with the surroundings. Passing glimpses of useless water heartbreakingly continued to lose itself back into the fog. I was angry with myself for the deadly predicament I’d gotten us into.

Fool! You’re a damn fool for thinking you could beat something that has killed a whole slew of very good pilots over the years, pilots with a lot more experience than you.

We went on through the unrelenting fog for I don’t know how long, zigzagging as visibility allowed toward Clova, burning twenty gallons of fuel an hour. The pounding of the motor hammered through my headset. I was using every bit of experience, every bit of learned-from error, to keep us airborne and alive.

Suddenly, an out-of-place shape grabbed my attention. I turned my head to see the monster just off my left wingtip. Rows and rows of large grey rivets dotted the huge high-voltage tower I’d somehow just barely missed crashing into. There were two Hydro Quebec power lines running through that area. Incredibly, in my state, they had somehow slipped my mind.

Looming in the split windshield, long, thick, black high-tension wires drooped obliquely in and out of the fog — now visible, now gone. I flew along, doing my best to keep the fire-carrying lines to my left, while looking for a place to get over them, realizing there was no safe place to do so.

For an insane moment, I considered going under the wires — that’s how low I was flying. But I pulled back on the yoke instead. I desperately pointed the nose up into the soup for an eternity that only lasted a few seconds, then pushed it blindly back down. I could see the ground again! I was astonished to still be flying. I couldn’t understand how my floats hadn’t snagged on the wires, and that we weren’t hanging upside down, caught like a struggling insect in a spider web, and burning.

The fuel needle was now closing in on the red line.

I was pretty sure I was somewhere northwest of Clova, but I didn’t know my exact position. The low, disorganized fog was relentless. Flashes of useless bodies of water continued to slip in and out of sight. Every second was poisoned with fear as I started to entertain the possibility of a crash landing. If there was no kind of water or clearing dead ahead when the motor quit, I’d aim the nose between two trees, allowing the wings to rip off on our way to the ground, to try to keep the cabin as intact as possible. With no more fuel on board, there’d be no fire. It would be our only chance.

I will never know what made me turn my head to the left when I did. Just then, I caught sight of two dull-grey silver lines below. Unbelievably, the railway track that cuts east to west across Quebec, between La Tuque and Val D’or, had shown itself to me. I knew I was either east or west of Clova. West made the most sense.

I banked hard left and set up to fly not much higher than twenty or thirty feet over the tracks, through the torn, dripping fog. I kept them in sight, desperately hoping Clova was up ahead, as it would be if I was to the west, and not behind me if I was to the east. The fuel needle was now kissing the red line, and engine failure could only be a few minutes away, if that.

What seemed like an eternity later, a white glow of reflected light in the cloud showed itself up ahead. A few straggling freight cars on side tracks confirmed to me that I was indeed almost upon Clova. I knew from experience that I needed to keep left of a tall radio tower and its many support wires, then get over a forested rise. If I could do those two things at the right time, Tamarac Lake would be under my floats a few moments later.

Instinctively, I banked left. To my right through the foggy haze, I barely discerned the blurred red glow of flashing radio tower lights, fading in and out of the bleakness as I flew by. Without thinking, I eased back on the yoke while hand-pumping down the flaps to set up a powered, nose-up flare. I waited to feel the water beneath my floats, fully expecting the motor to cough and quit at any second.

Then, incredibly, I could see and feel the water. I was on the lake and pulling back on the throttle. The floats settled in as their drag bled off the remaining speed.

I struggled to contain the deep shaking inside my body. The relief was indescribable. I couldn’t think of anything to say to the kid. I’d hardly been aware of him, but now I could really feel him beside me. He had to have been frightened beyond belief.

I taxied up to the dock and secured the airplane to it. As I began to unload the kid’s gear and kill, Evelyn opened the office door to survey the scene. She looked at me, then at the low ceiling practically touching the water and shook her head slightly before going back inside. I knew what she was thinking and was sure I’d hear about it later.

As I hosed down the deck inside the plane, the kid looked at me as his father had done earlier, his eyes searching for the truth behind my eyes.

“Were those red numbers displaying the fuel level?” he asked.

“No, that was the Loran-C, showing miles to destination in tenths,” I replied.

“That was no routine flight, was it?” he asked.

“No, it was not,” I replied, but said nothing further.

I wondered what he would have to say to his father. I shook his hand, and walked away, leaving him standing there with his stuff all around him.

I walked up the dirt road, past my cabin and up the rise to the little local bar. The place was not much more than an L-shaped room with a few tables and chairs, a jukebox against the wall, a counter with a few stools and a single row of bottles behind a counter. A nook with a hotplate served as a makeshift kitchen area. The bar was attached to living quarters where the owner/barmaid Francine lived. She usually wore a short skirt and tight top, inviting a man’s eyes her way. On any other day I’d be looking at her, tempted to flirt, but today I just collapsed in a chair. 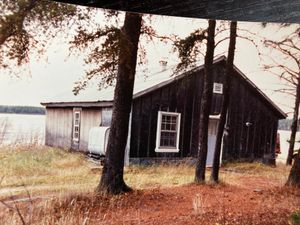 She obliged me. I ordered two more in short succession. I sat there in a daze, trying unsuccessfully to get drunk, giddy to be alive and still very shaken inside. A French song was playing on the juke — Allons danser Colinda, pendant que ta mere nous voit pas.

I’ll be damned! I’m still alive, I didn't crash the plane and that kid’s dad will see his son again.

I closed my eyes. I admitted to myself that I’d allowed overconfidence to become my mortal enemy.

I’m going to kill myself or worse if I keep doing this up here, and maybe take somebody else with me.

As I made my way back to my cabin, I could feel something changing inside me, but I couldn’t put my finger on what it was exactly. Once inside, I picked up my old Gibson guitar. With the whiskey still coursing through my veins, it took a while before I could play steady. I hit an E chord over and over, like I used to do when I’d first gotten a guitar from my mother as a teenager. I poured myself another whiskey and kept playing that same chord, again and again.

I would carefully finish out the season, then think only about writing my own songs. I was 41 years old.