I’m in the kitchen of my long 1957 Spartan trailer, with its turquoise stove top. My chef’s knife makes a swishing sound going through the strong onion flesh, as I dice it up into pieces about a half inch in size. I chop up a clove of garlic, then slice up half a red and half a green pepper. I put the onions in a big cast iron skillet and turn on the propane burner to a little under medium. I add olive oil to drench the onions and stir it up with a wooden spoon, while salt and peppering generously.

As I do this, my mind wanders to the East Outlet, which drains out of Moosehead Lake in Maine. When I lived back east, I fished the East Outlet many times with my friend Dan. The water there is of a deep, dark blue-green and it moves in a hypnotic way. Below the surface, warped light and shadows dance with one another among the rocks and aquatic life.

Dan was a bartender in a place I used to play called the Plough & Stars, on Mass Ave in Cambridge Mass during the eighties. One night after closing time, we went fishing together, not getting home until mid-morning the next day pretty wasted. We have been friends ever since. Dan showed me that I was a fly fisherman; I just didn’t know it yet.

The enticing sound of the river grows louder as we get closer. Before we wade in, Dan throws a fly at the shallow water by the edge, in case a fish might be in there. Then we move upstream and away from the trees. I find a place where the water is a little below my wader belt, and Dan parks himself fifteen or twenty feet downstream from me. My wading boots feel solid in the rough gravel. The water is cold and presses against my waders as the river makes its white music. 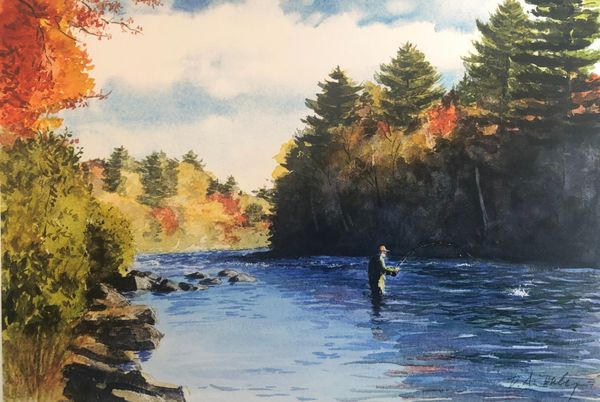 When the onions start to brown up a little, I put the peppers and garlic in with them. I splash a little Tamari sauce on the good-smelling mess. I put my steamer basket in a pot with an inch of water at the bottom and turn the back burner on low. I chop up green beans, broccoli, yellow beets, carrots and snap peas, then throw them all into the pot, except for the broccoli, which I set aside.

I can’t see Dan’s sparrow fly, but he can. He knows right where it is. It makes the tiniest dimple in the shiny light reflecting off the water. He’s allowing the fly to drift slowly in a most natural way. We have some fifteen feet between us and the faster water that pours through there having its way. Dan’s fly makes no wake as he mends his line upstream, keeping the slow drift going naturally for as long as possible. He’s rubbed a bit of the mud he keeps in a tin onto the last few feet of leader and tippet, to camouflage his line.

He’s staring where he knows his fly is located, after it has sunk into the glassy film, now just barely below the surface. His head sits forward on his neck, intently eyeballing the scene. From the left and toward the other side of the river, two ducks fly close together a few feet off the river, heading downstream. They look like they know right where they’re going, with their necks stretched out ahead of their bodies and their wings beating the fall air.

The onions, garlic and peppers are caramelizing now, almost burnt-looking. I add some more chicken broth into the big skillet.

Suddenly, Dan raises his cane rod and has a landlocked salmon on. The fish leaps out of the current a few times, shaking light-filled water droplets into the crisp air, then dives downstream. Dan gets this look when he has a fish on — half grin and half grimace. The fish strips line off his reel with a zinging sound. He controls the outgoing line by cupping his left hand against the reel. After walking downstream a ways with the running fish, he tires it out and nets it. He unhooks and admires it, then holds it in the current until it swims out of his hands. 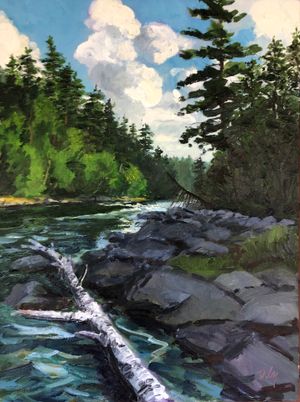 I slice up some organic thin-cut chicken breast into roughly ¾-inch pieces and drop them into the deal. I stir and sprinkle in Spike, Old Navy and lemon pepper seasoning — just a bit of the last.

I am fishing with a streamer, which imitates a minnow swimming in the slanting light down among the rocks. I have a sink-tip line on to keep it as close to the bottom as I can. I cast across and upstream over the complex current. I wait for the line to sink then strip the line back in, allowing the stripped line to gather and drift on my lee side.

After a fair number of casts, a fish hits my streamer. It’s not a big fish, but it’s not small either and it has some moxie. My rod tip is bent down toward and following the movement of the fish, and my line slices the water as it goes. The fish frantically strips out a bit of line, then I work it back toward me and begin to catch flashes of its colors in the clear water. When I get it close to the surface, I see that it’s a brook trout of stunning beauty. Its speckles, orange belly and dark and white fins make me smile. As I reach behind for my net, the fish makes one more dive close to me, breaks off and is gone. Although I likely would have released it, I stand there imagining how it might have looked, smelled and tasted coming out of the skillet, all crumbly and delicious.

I drop a little maple syrup, more broth and a bit more Tamari sauce into the sizzling mix, then add broccoli and cover the skillet. The veggies, having steamed for about five minutes, are hot and still crunchy now as I turn the burner off and scoop them into a large glass mixing bowl. After about a minute and a half, I uncover the skillet to witness the bright green broccoli against the bubbling golden color underneath. I empty the contents of the skillet on top of the veggies in the mixing bowl. I chop up two apples and drop them in along with sesame seeds and jumbo raisins, then mix the whole thing up. I’m good for this evening and a few more days. 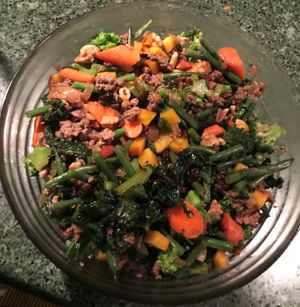 It is almost dark when Dan and I walk out of the river. We’ll either come back here tomorrow, or fish the Moose River.